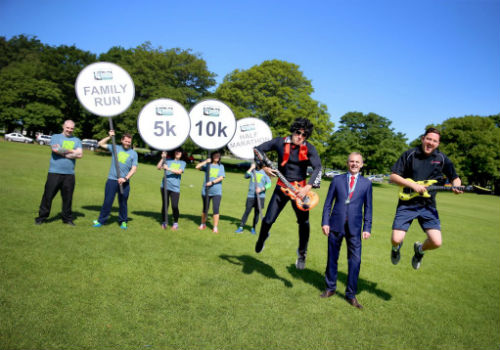 CEO of Affidea, Tom Finn, said: “Affidea is delighted to be announced as title partner of the Rock ‘n’ Roll Half Marathon. This is a key race in the Irish running season and we look forward to being part of the Rock ‘n’ Roll marathon this year and in years to come. This race is a great concept that makes healthy things fun, and fun things healthy. On behalf of everyone at Affidea, I would like to wish everybody taking part the very best of luck.”

Stacey Campbell, Vice President of Global Events for the Rock ‘n’ Roll Marathon Series, said: “We are excited to welcome Affidea as the title partner of the Rock ‘n’ Roll Dublin Half Marathon, which provides a unique, world-class running event and rock concert all-in-one. We look forward to working closely with our new partners at Affidea to operate our best event to date, in Dublin this August.”

The 2016 Affidea Rock ‘n’ Roll Dublin Half Marathon weekend is a fun-filled, festival of running with 21.1k, 10k and 5k races making the event accessible to runners of all abilities.

The 5K takes place on Saturday, 6 August at Phoenix Park with a mid-morning start time of 11am. Both the half-marathon and 10k will start together on Sunday at 8:30 am in the Dublin’s Docklands area and finish in the Phoenix Park.

Runners can take the “Remix Challenge” and complete two-days of running, earn a bonus third medal by running in both the 5K on Saturday and any distance on Sunday.

To keep runners inspired along the route, all races will feature live bands and DJs playing everything from alternative to classic rock, punk, funk and blues along every mile of the course. At the finish line, runners and spectators will be treated to a main stage festival starring local acts.

Not forgetting about the loyal loved ones cheering from the sidelines, there will also be a 3K Family Fun Run on Sunday for everyone beginning in Phoenix Park from 11:45 am and finish line festival with great entertainment, food and music for all attending. The Family Fun Run has been a huge hit for young feet, old feet and tired feet alike since it began two years ago and has previously attracted up on 2,000 runners, many of whom take part with their families having just completed the half marathon event.

The 4th annual Affidea Rock ‘n’ Roll Dublin Half Marathon will return on Sunday 7 August 2016. The event features the best of local talent with live bands entertaining participants along the scenic course. The race starts in the heart of Dublin at the Docklands, runs along the River Liffey, travelling past many of the city’s historic landmarks, and finishing in the scenic Phoenix Park.

The Dublin race is part of an international series of musically themed marathons and half-marathons, which revolutionized the running industry in 1998 by infusing the race course with live bands, cheer teams and entertaining water stations. Over the 19-year history of the Rock ‘n’ Roll Marathon Series, charity partners have raised nearly $320 million US through the events for a variety of worthy causes. For more information about Rock ‘n’ Roll Dublin Half Marathon or to register for the event, visit RocknRollDublin.com or follow @RnRDublinHalf on Twitter.